In the Digital South Asian Library of the University of Chicago there is a rare collection of photos taken all over South India in the mid 1800s. The original collection is found in the Museum of Contemporary Art, housed within the Government College of Arts and Crafts (Chennai). Among the photos are six photos of the Shri Shiva Nataraja temple of Chidambaram. It is a rare treasure which show several features of the temple that have since disappeared or changed beyond recognition. The photos shine a new light on the history of this ancient temple. Some ten years back Raja Deekshithar and I created a small website featuring these photos with historical and architectural information about what the photos show us. As Raja’s original websites are no longer active due to his passing away in 2010, I will now share this material here. And also add further details as they come available through the research.

Possibly the most interesting photo from the collection is the one of the Mukkuruni Vinayaka temple in south-west corner of the fourth. The photo presents us with a gem of Early Chola architecture with the West Gopuram or gateway of the Nataraja temple in the background. This shrine no longer exists in this form. Actually there are no structures within the temple complex today that can be dated with any certainty to before the 12th century. Except the Chit and Kanaka Sabha. The photo and what it shows us represents an unexpected window on the past. The shrine is shown from the south-east. It displays features typical for the architecture of the Early Chola period, as well as several unique and unusual features. Read more 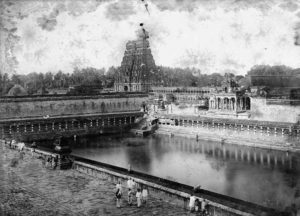 In this photo we are given an overview of the Shivaganga Tirtha with the 100 Pillars Hall. With the West Gopuram in the background and the prakara wall of the Shivakamisundari shrine. Read more 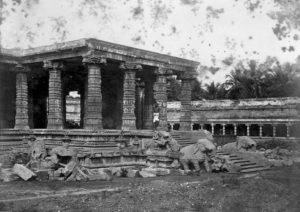 The Pandya Nayaka shrine is the temple for Shiva’s second son Murugan or Subrahmanya within the Chidambaram temple complex. It is situated in the north-west corner of the complex, as one of the secondary shrines of the 4th prakara. Read more 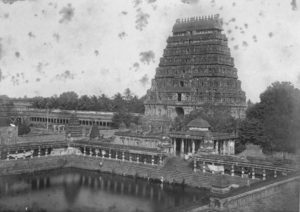 On this photo we see the northern part of the temple. Visible are the northern
bank of the Shivaganga with its pillared veranda; the steps leading from the
water up to the mandapa; the North Gopuram; the Nava Linga temple;
and the courtyard of the Pandya Nayaka temple with its prakara wall. What we also see is a small shrine with a high vimana near the north-west corner of the sacred tank. This shrine is no longer in existence. Read more 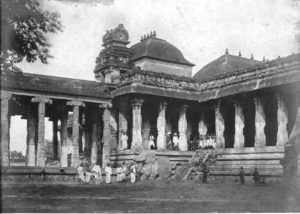 This is a photo of the front porch of the Raja Sabha or Thousand Pillar Mandapam. It is situated in the north-east corner of the temple complex of the Shri Shiva Nataraja temple. Read More 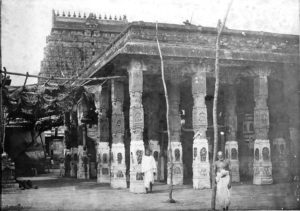 This Pillared mandapam once existing in the inner prakara of the Shri Shiva Nataraja temple. Read More