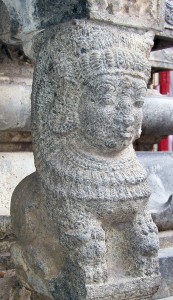 The art and Mythology of ancient civilizations has given us several eye-catching Mythological composite beings. These mysterious creatures combine parts of various animals and sometimes also include parts of the human form. Centaurs, Sirens, Gryphon are some examples from ancient Greek art and Mythology. Even relatively recently people thought mermaids were existing in far-away lands.

One composite being generates a special interest and fascination in many of us. With the body of a lion, and the head of a human being, the sphinx is one of the best know symbols of ancient art and Mythology. For our ancestors it was a very elevated spiritual being, embodying secret knowledge and wisdom. It was also know to guard sacred places. The most famous sphinx is without doubt the Great Sphinx of Gizeh that guards the Pyramids of Egypt.

In people’s minds the sphinx is mostly connected with the ancient civilizations of Greece and Egypt. But many depictions are also found in Mesopotamia and other parts of the Near East, and around the Mediterranean. Sphinxes are also found in medieval churches, and were popular with neo-classical architects and sculptors. It may come as a surprise that a Mythological being just like a sphinx is also part of Indian art and tradition. This fact has thus far gone unnoticed and unrecognized.

The sphinx of India is known as purushamriga, which means human-beast in Sanskrit. Depictions in various styles from different historical periods are found all over the South Asian subcontinent. Carved in stone and wood, cast in metal, or painted, the sphinx-purushamriga adorns and guards many Hindu temples and Buddhist monuments. Not only is it part of the artistic heritage, but it also still plays a significant role in the living traditions and in ritual.