Now Mahabalipuram is a famous Unesco Heritage site and tourist destination. The first traveller to write about is extensively was Jacob Haafner, a scribe with the VOC living at Sadras. Herein this blog his description is translated into English for the first time. 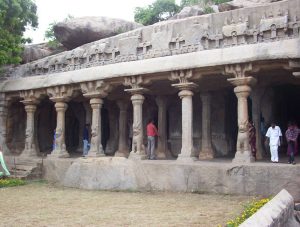 Possibly one would find still many commendable things in these subterranean halls, books and writings, which are hidden in there, and which could offer an explanation of the history of these almost forgotten centuries; it would be worth while to examine these vaults carefully, and to penetrate into them; I have, when I was still in Sadras, many times felt the desire, if it were not because of snakes and other poisonous animals, that could dwell there, I was withheld thereof.

How marvelous these works may be, however, they are surpassed by many others that are seen from afar on several hills, but which because of their steepness, and the thick undergrowth with which they are overgrown, the living place of toxic and ravenous beast, are not to be climbed.

On the branched crown of one such a steep, and utterly unapproachable high rock, stands a temple, for all means and purposes still intact. The Bramins  say that one could climb to the very top along stairs from inside this rock; but from time immemorial no one would venture into there.

Wholly outside the village on the south side, there are five temples of varying size and shape, and just a few steps separated from one another; they are carved from one and the same mountain, and thus literally all five from one piece. The roof of the middle and largest one is round or domed, and has a great crack, it is said to have been caused by lightning. All these five temples are full of allegorical figures and idols, which, as well as the pillars that support the roof, all belong to the same rock.

Near these temples are several animals such as elephants, lions, etc. larger than life-size, which are also carved out of the same mountain.

In one word, most of these ruins, as far as the temples are concerned, are all carved out of the solid rock, and thus formed of one piece; However, there are also several, that are build out of  square large bluestone blocks, these stones are smooth inside, and rest from their own weight  on one another without any joining of lime or cement.

One should be surprised when one considers what a power has been necessary to bring such immense blocks to a height of 80 to 100 and more feet, with what tools they could do it, is unknown to me and impossible to understand; but these piled up rocks, if I may so call it, prove satisfactorily that the Indians of that time, knew the forces of mechanics, even better than we do today, and therefore they must consequently have reached a high degree of science.

In many of these memorials and ruins, one finds inscriptions; but the characters are utterly unknown, and among the most learned Pundits, has as yet nobody come forward, who could read them. They differ altogether from those of the Samscrit, Nagarie, Grindam, or other ancient Indian languages.

The city must have been of an extraordinary size, if one counts, that she covered not only the whole valley, which is three miles in the round, but still above also the easily twice as large sprawling region, which is now covered by the waves.

When, and in what manner, the sea made this infringement, either by hurricane, or gradually, – is completely unknown.

The high antiquity of this city, is lost in the dark ages; its origin is hidden under the veil of fables and of the time of her destruction nothing at all is known.

One can find only in the famous Epic, the Mahabaroth, some dark notes made of it, as of her distance from the mouth of the Ganges, and the hero Joudishter, which would have ruled there – which is also likely.

You can read the full chapter HERE