Jacob Haafner was deeply fascinated by the ancient ruins of Mahabalipuram. He visited often, he tells his readers, while living in Sadras. Here he speculates about it having been the great city of Yudhisthira, the hero of the Mahabharata. Even in his day. the eighties of the 18th century, this heritage site was connected to the Mahabharata through the naming of the monuments. 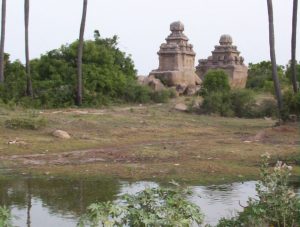 Jacob Haafner muses about the origin and the monuments. The Pidari Rathas.

Possibly this same Joudishter was her founder, who gave her, in honor of his friend and protector, Kishna, the name of Mahapilliepoeram, or the City of the great Tiger (*) ; Pillie signifies, in the Nagaric language, Tiger. Some will that this town derives her name from Mavalie, signifying the Samscrit a Peacock; others again from the King or Raja Bali, after whom she would have been named Mahabalipuram, or the city of the great Bali. But the latter is not likely, as this prince reigned in Ajodhia, the present Ude.

(*) Bieshn in his outar or metamorphosis as Kishna, is called in the Samscrit Mahabhag, or the great tiger. Outer actually means, come into the world.
In general there lies on these relics and antiquities, which one find spread in abundance over Orixa, Choromandel, Ceylon, Bengal, Hindustan, Malabar, and other countries, one impenetrable darkness, and the histories, who mention of it, are mostly fabulous and insufficient.

Meantime these antiquities show sufficiently, to which a lofty level of science and civilization the Indians of that time had risen, and one must generate very venerating thoughts of greatness and power of these peoples, who have been able to undertake and finish such colossal endeavors.

The all destructive time, and even more than that, the destructive hand of man, has, so far, been able to accomplish nothing; the building form itself, has insured them against all devastation. Centuries they have already been standing, and they may for last ages more; and as for the subterranean halls and caves, even these will probably not, except with the world, or the mountains where they are dug or chiseled, be destroyed.

It was getting dark already when we returned from our walking, or rather clambering over rocks and hills; we had scarcely seen a twentieth part of the ruins; in deed, to investigate everything detailly, one would need a week and longer.

The Chauderie, in which we had pitched our camp, and which had seemed to us the best, was with some others more just outside the village, and was totally empty, outside of us there was no one in it, any more than in one of the others.

The reason for this is that no traveler or pilgrim lightly will spend the night at Maveliewarom, because of the wild animals, as Tigers and Jackals, even Hyenas, who haunt these with impenetrable thicket and brushwood-covered hills and mountains, and in the ruins and monuments.

Our Coolies had, so it seemed, little mood to proceed again on the journey; we would still not have been able to reach Sadras before midnight, also we were not provided with torches, and I besides I had things to do in that place, and wanted very much to arrive by day; So we were  necessitated to spend the night at Mavelievalom. The Brahmins of this village advised us to beware of the wildlife, had it happened, they said that travelers were taken by tigers from the Chauderies. And not long ago, one of the villagers had been killed by one of these animals.

So we decided to keep watch in turn. I ordered two large fires to be made for that portion of the Chauderie where we had made our camp, and enough wood to feed them during the night.

You can read the full chapter HERE