Jacob Haafner’s* Mahabalipuram: comparable to the miracles of Egypt. 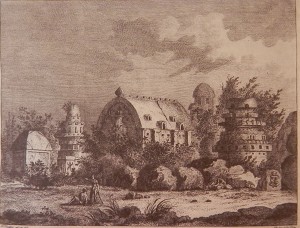 With the dawn we boarded again in our Palanquins. We saw the mountains of Maveliewarom ahead of us and around two o’clock in the afternoon we entered the valley and found ourselves almost in the center of this large collection of miracles.

What an amazing scene for anyone who comes here for the first time! His contempt for the people of India can be ever so large and he can be heavily biased against them, but as soon as he has seen Maveliewarom, he will have to admit that these people must have had a high level of civilization. That the arts and sciences have previously experienced a flourishing and that everything we call miraculous as the pyramids of Egypt cannot be compared with the awe-inspiring ruins and colossi that can be found in Maveliewarom and spread across India.

In this valley it is always teeming with all kinds of birds in more numbers than I’ve ever seen elsewhere. From hill to hill the cooing of the innumerable turtledoves echoed which have here their nests in the cracks of the rocks and the hollows of the ruins without being disturbed.

My imagination carried me back to the days of antiquity, to unknown and bygone ages when the great Joudishter held sway here, and from here send out his orders to all corners of his vast empire.

* Jacob Haafner was a  Dutch traveller in India in the latter part of the 18th century. Jacob Haafner’s India

These are excerpts from his “Travels by Palenquin”, published in Amsterdam in 1808. Translated by Liesbeth Pankaja Bennink