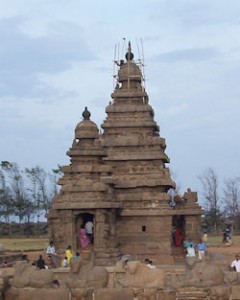 I’ve often been at Maveliewarom, when I lived at Sadras, which is located about one and a half mile away from there. I have sometimes dwelled there a whole day, seen everything, studied and drawn it; but every time I saw these wonderful creations with new pleasure, with new delight and wonder. This time once again they seemed new to me, I was so eager to examine them, as if I had never before seen them.

What an impressing sight are not those ancient buildings of the strangest shapes and form, whose rough and irregular order of construction are more pleasing to the eye, more instilling wonder and reverence, than most beautiful and largest palaces of our time!

Amazement fills the soul, when we enter into these deep subterranean spaces, where the owls and bats buzz; these lofty vaults, chiseled deep into the mountain, with their immense columns, hewn from one and the same stone.

Nowhere in the whole world one finds together in such a small area, so many buildings, hewn into and out of mountains and rocks, as at Maveliewarom – all the hills are covered with temples, pyramids, Chauderies and such, and hollowed out by subterranean vaults, and of one piece, and formed from the same mountain on which they are standing.

Remarkable, among others, are seven temples, that stretch in a straight line from the shore, one behind the other, for as far as a mile or more, like a reef of rocks, deep into the sea.

Over the two farthest her waves roll away unhindered, and their tops are visible only just at a very low ebb; the others rise, the one higher than the other, above the water, and rise from the depths, to the extent that they are closer to the beach, and break the surf with a dreadful din, against their unshaped and black tops and sides.

The first or nearest of these seven temples, is still just on dry land, at the uttermost edge of the sea, and her waves stream in and out, at high tide. Also one can see, at a very low ebb, far and around, the tops of many other ruins stick out from the water, making this part of the coast very dangerous for ships; many have oftentimes been shattered against them, and the seven pagodas of Maveliewarom are known to and feared by all sailors; they can be found even noted down on the map.

The city must have been of an extraordinary size, if one counts, that she covered not only the whole valley, which is three miles in the round, but still above also the easily twice as large sprawling region, which is now covered by the waves.

The high antiquity of this city, is lost in the dark ages; its origin is hidden under the veil of fables and of the time of her destruction nothing at all is known.

One can find only in the famous Epic, the Mahabaroth, some dark notes made of them, as of her distance from the mouth of the Ganges, and the hero Joudishter, which would have rules there – which is also likely.

* Jacob Haafner was a  Dutch traveller in India in the latter part of the 18th century. Jacob Haafner’s India

These are excerpts from his “Travels by Palenquin”, published in Amsterdam in 1808. Translated by Liesbeth Pankaja Bennink