A little while ago I wrote a blog sharing with you something about the treasure map of the ancients. This treasure map is the whole of all humanity’s traditions, mythologies, spiritual heritage. We can spend all our lives connecting the dots, questing for the treasure. And as they say, sometimes the journey is even more interesting and relevant that the goal at the end. One of the connecting dots is the concept of the Elements. 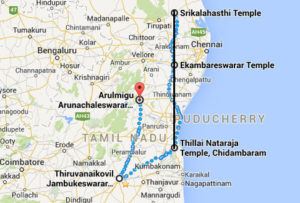 An element is a part of what constitutes a whole. Today we work with the 118 chemical elements of the atomic table. Each chemical element has a particular atomic make-up which gives it its characteristics/properties. Decides whether it is a metal, a gas, etc. This has proven an economically very successful approach. But it has also a limitations, boundaries. Because the last few decades astronomical observations have led to the conclusion the known universe consists for 85% of Dark Matter. Something which we cant see, or measure. Except by its absence.

The cosmology of all the ancient nations describes the constituent parts of the material universe as five. Although they constitute material reality, they are considered almost as a minor detail. As the ancients thought of the cosmos as primarily spiritual, intangible, energy.

India is one of the great cradles of civilization of our humanity. As with possibly all the great civilizations of the past, its history and evolution have been terribly misrepresented by academic scholarship of the past century. Astronomical data in the sacred texts, the four Vedas, contain references to very ancient layers. Up to possibly some 13.000 years into the past. We have hardly begun to decode the information conveyed in these great texts and the connected traditions. Because so far they have been treated as irrelevant because of not having much historical significance or being too esoteric. 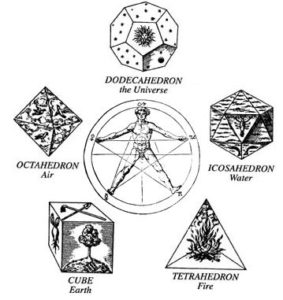 In India we find a civilization with an unbroken tradition going back to the earliest beginnings of our time-frame and collective memory. The cosmology underlying its great temples, their ritual practices, and mythology describes the constituents of our material reality as five, calling them the Mahabhuta, the Great Beings. Named as Earth, Water, Fire, Air and Aether. In Sanskrit Prithivi, Apas, Tejas, Vayu and Akasha.

They are the last phase of the creative process through which our cosmos evolves. Constituting the material, gross, or sthula plane of our reality. This so called material, gross plane is actually seen as almost an afterthought. Absolute Consciousness devolves through various stages of materialising, as various aspects of cosmos are split out, with the Great Beings coming into existence as final, most gross plane.

Thinking about these concepts it seems what is indicated is not so much the stuff or matter, but the states. Like solid (Earth), liquid (Water), gaseous (Fire), plasma (Air). The phase changes of modern physics. The question would then be what does Aether stand for? A phase change we have not yet discovered?

Another interpretation I have worked on is the identification of Earth, Water, Fire and Air as the four Fundamental interactions, also known as fundamental forces. These are the interactions in physical systems that do not appear to be reducible to more basic interactions. There are four conventionally accepted fundamental interactions—gravitational, electromagnetic, strong nuclear, and weak nuclear. Each one is understood as the dynamics of a field. With Aether or Akasha as the grand unifying force of space itself.

This model of creation and reality has pervaded all cosmology, metaphysics and philosophy in what is now described together as South Asia. And had its impact and influence all over Euro-Asia. There are different interpretations, angles, in various schools of thought and doctrines. These are variations on a theme, as it were.

Kshetra, the Fields of the Great Beings

As the ancients created various mnemonic and other devices to encode their knowledge they created architecture, art and myths conveying the information. Part of this is the network of sacred sites all over the subcontinent. This has been so far best preserved in the South of India, where generations of various communities defended their dharma, justice and duty, against invaders and other threats. 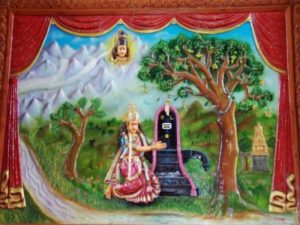 The Ekamranatha temple in Kanchipuram is the first of the Mahabhuta temples. It is the Prithivi Kshetra, the manifestation of the Element Earth. Shiva’s consort Parvati performed penance here. And saved the Earth Linga she had made from a great flood.

Shiva and Parvati reside on the sacred mountain Kailasha in the Himalaya. Once in a playful mood  Parvati covered her beloved’s three eyes (Sun, Moon and Fire) for a moment in a game of ‘who is this’ and the whole universe was plunged into darkness for aeons. To atone for this error she was born on earth in mortal form. On the bank of the river Kampa, under the shade of the Ekamra, One Fruit Mango Tree,  she had formed a  Linga from some earth on the river bank, as representation of Shiva. One day the river burst its banks and threatened to wash away the Linga, but she protected it with her embrace. The impression of her bangles are still seen on the Shiva Linga in the sanctum. 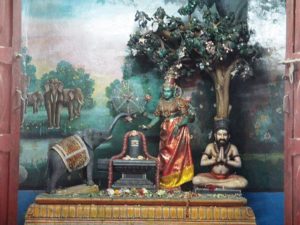 The Jambukeshvara temple at Thiruvanaikaval embodies the Element Water. Water manifests here through a perpetual source originating under the Shiva Linga in the sanctum. An elephant and a spider worshiped this Linga, each in its own way. The sacred tree here is the Jambu. Parvati perfomed penance, and was initiated by Shiva. Here she is his student, not his consort, with Shiva facing West (unusual) and Parvati positioned opposite him, facing East.

The Arunachaleshvara temple in Thiruvannamalai embodies the Element Fire. After saving the Earth Linga with her embrace Shiva directs Parvati to Thiruvannamalai where Shiva appeared to her as a pillar of fire. Now light is back in the world. Today the sacred mountain Arunachalam marks the place where the cosmic fire pillar manifested for Parvati. Once a year, when the full moon is in the Pleiades, a great flame is lighted on top of the mountain in remembrance. Then Shiva merged with her and she became his left side, as Ardhanareshvara, half male, half female.

The sacred mountain Arunachalam and the Pillar of Fire also manifests in the myth which tells about Brahma (god of Creation) and Vishnu (god of Preservation) quarrel over superiority. The pillar of fire appears between them and challenges them, who can find its root or its crown. Neither power achieves this. Shiva (god/power of Transformation and Dissolution) is the cosmic pillar of fire, neither his crown not feet can be found without grace. 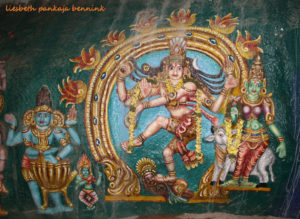 The Srikalahasteeswara Temple in Srikalahasti is dedicated to the Element Air. This manifests in the sanctum as a perpetual flow of air. The air stream moves the flame of the lamp  in the sanctum.

Parvati, Shiva’s consort was banished to earth when she broke her vow of silence after Shiva initiated her. She also boasting about it. She lost her physical form and beauty, became a ghost. She now dedicated herself once again and performed strenuous penance on the South-West corner of the Air Linga. Shiva send a flood to test her dedication. As Durga she protected the Linga. Shiva appeared with full moon in lunar mansion Pusya. She received a new spiritual shining form as the embodiment of Wisdom through Self knowledge. Her body went from black to golden color. 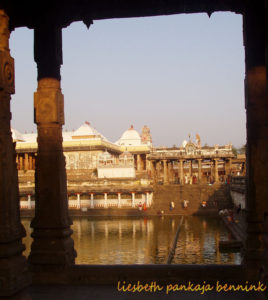 The Shiva Nataraja temple in Chidambaram is the field of Akasha or Aether. This is the Heart Chakra of the world, where on the south bank of the sacred pond, in what once was a forest of Tillai trees is the Chit Sabha, the Hall of Wisdom. Aether, space, void, is present in the form of a yantra and the empty space to the left of the Dancing Shiva. This is the Formless aspect of the divine. Goddess Parvati witnesses His Dance and accompanies, beating the cosmic rythm with her cymbals.

Under the Golden Roof of the Chit Sabha we find the Akasha Linga as a space identified through the Chidambaram Rahasya, the Secret of Chidambaram. A black and red screen cover the sacred space of the Formless representation of the Divine. Black on the outside and red on the inside the Divine is represented as Space. Is it empty? Or is it full? Behind it strings of golden bilva leaves represent the manifestation of creation: from nothing to everything. A yantra indicates the Akasha.

The quest of the soul

In these classical versions of the myth the goddess is the soul in quest of (Self) Knowledge  and reunification with the cosmic source, the divine absolute consciousness, the Independent Primordial Spirit. Here as Shiva, the divine lover and husband, who is also an ascetic and antisocial. Of course there are also secret, esoteric versions of these stories. Each having its own meaning for each seeker.

It is a real amazing experience to travel to these five Great Element temple, walk the amazing hallways and feel the energies. If you wish you can join Patricia Awyan, Stella Wheildon, Suzan Moore and Nayanatara Chakravarthy and myself in January 2017. A unique opportunity for realization and finding your true self. 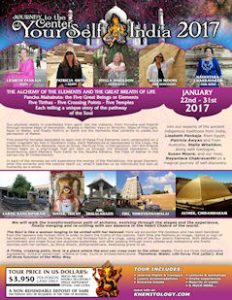