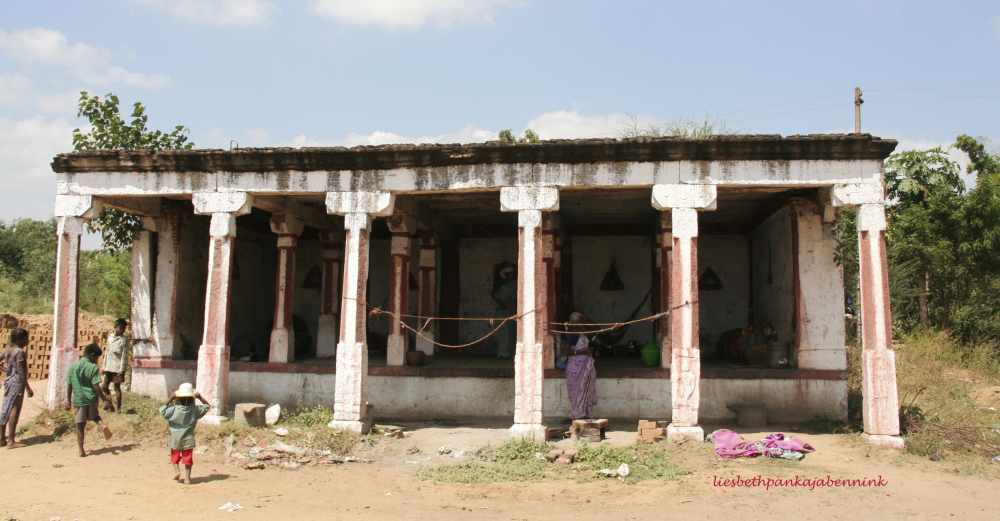 The eclipse pavilion at the edge of the brickworks in the village of Palur was in good shape when we visited in January 2010. This mandapa faces south, towards the river Palar, which flows about 150 meter south (when there is rain). A Ganesha shrine is located just a little distance to the East. The river here has the function of the tirtha. The ancient city of Kanchipuram lies about 25 kilometers upstream. The eclipse pavilion is situated just left off of the Chengalpattu – Kanchipuram road, and is visible from the road.  Some of the worker families from the brick-making factory had taken refuge in it. But they were not in any way creating a disturbance, as far as we could see.

The front porch is six pillars wide, with a depth of four pillars. After the open porch a raised floor three pillars deep is enclosed by brick walls on three sides. Although the structure itself is well built and well maintained, the artwork on the pillars is of very poor quality. The quality of the sculptural work is very less compared to the reliefs known from Pallava, Chola, and Vijayanagara periods. Or even from the more recent periods. The human figures depicted may be gods or humans. It cannot be made out.

The pillars have a square base, an octagonal body, and a square top. The corbels are simple, rectangular, and throated. They are decorated with rough abstract symbols and with an occasional human head with fangs protruding from the mouth, very likely Rahu, the demon that causes eclipses. The square bases are partly decorated with very simple depictions of human figures that cannot be identified with any certainty. On the corners the bases form the rearing naga or cobra heads, usual for the Vijayanagara and Nayaka period.

The quality of the ceiling reliefs is actually rather better, even if somewhat rough. We can make out easily what is represented. There are many serpents with discs. Some obviously intended to represent the moon by the depiction of the lunar sickle within the disc. We can infer that the plain discs point to solar eclipses. There are many fish of various figurative types. Some fish occur in pairs, facing each other, some tailing other fish. Some fish face discs, or even a human face. This could possibly be Rahu, the demon who, according to mythology, causes the eclipses. There are a few lizards, and also some Makara. The Makara is a mythological aquatic animal that is sometimes represented as a fish with an elephant trunk. There is also a relief of the mysterious feline (cat-like) animal also found on the ceiling of the eclipse pavilion near Mahabalipuram. Here in Palur though the animal has spots instead of stripes. Is it a tiger, or maybe a panther? And what is its significance in connection with the eclipse?

In the center of the ceiling there is a short inscription in Tamil script. It states a date: 1897 April 12th. And “Palur Padhangeeswara Swamiyaar Paarivettai mandapam”. The date is in the Gregorian calendar, which in itself is strange for a Hindu religious structure. My thanks for the transliteration and trasnlation goes to Padmapriya Bhaskara and Professor Sankaranarayana. And it refers to the late 19th century. Which is later than the style of the sculptural work and the architecture would suggest. Also, the inscription seems to interfere with the fish right by its side, somewhat covering its tail. Was this inscription carved at a later date than the construction of this eclipse pavilion? Maybe to safeguard the mandapa as temple property.

Shri Pathangeeshvara is the Lord of the ancient Shiva temple of Palur. The origin of this temple goes back to the Pallava era, at least. The present temple structure (the main vimana and ardhamandapa) was constructed during the Chola period. As Raja Deekshithar and I were on our way to Kanchipuram for another project at the time (2010), we didn’t visit this temple, alas. The temple’s sthala-purana refers to Surya, the Sun, worshipping Lord Shiva here because of Graha Dosha. Graha dosha is the negative influence of a planet and refers especially to the negative influence that occurs during an eclipse. Surya, the Sun, worshipped Shiva in this temple. The Sun suffered from Graha Dosha, which is the negative effect of the eclipse. Shiva released the Sun from the grasp of Rahu, the demon who, according to the mythological understanding, causes eclipses. For more information on the Shri Pathangeeshvara temple, you can visit Veludharan’s Blog

Therefore, the temple’s mythology establishes an ancient and direct link to the sun and the solar eclipse. Which provides a direct connection with the reliefs found on the ceiling of the eclipse pavilion on the north bank of the Palar river, just a few hundred meter south-west of the temple. Although the inscription has a date of 1897, the mandapa’s architecture points to the 16th to 17th centuries. This was the Vijayanagara/Nayaka era.

What could be the connection between the ritual of the Parivettai festival and the eclipse symbolism found on the ceiling of this mandapa?

Parivettai is one of the utsava or festivals celebrated in South Indian temples as part of the yearly ritual cycle. For this festival the deity goes on a (symbolic) hunt, with his bow and arrows. The devotees carry the caramurti, that is the movable form of the deity (usually a bronze), with great pomp and ritual to a place away from the temple and the village, to enjoy an outing. It is a symbolic hunt of course. This link takes you to a video of the Parivettai festival of Lord Varadaraja Perumal of Kanchipuram.

This Makara, a fish with a long elephant-like trunk, ‘catches’ a smaller fish with its trunk. And a large fish ‘nibbles’ on the tail of the tiger or panther.

Cobras chasing the Sun and Moon, and many, many fish

A lizard among the many fish

Two fish, the one following the other

How to decode the many and various eclipse symbols?

Fish, Naga and Rahu’s head, but why the fish?

The eclipse pavilion at Palur, on the north bank of the Palar river