There is still so much mystery surrounding the Sphinx of India and its history and tradition. Originally overlooked in the first centuries of study and research, often almost forgotten by the living intangible heritage preservers, only discovered a few decades ago by Raja Deekshithar, and still not much realised. This post has become possible by the keen observation of Shashi Kolar at the maillikarjuna temple in Pattadakal, Karnataka. Thanks Shashi.

Update 5th june 2-16: Shortly after posting this my friend Corinna Wessels-Mevissen reminded me we had actually discussed this in 2013. Sorry dear readers, don’t remember really. Anyway I expressed doubts about the identification that time. Later Corinna was told by some other scholars the scene is form the Mahabharata, when Pandu shoots and kills Muni Kindama, who has taken the shape of a deer.

Raja Deekshithar first realised the two mythological creatures guarding the entrance of the Nataraja temple Chidambaram were sphinxes while still in his youth. The sphinx has a lion body and a human head, and is positioned at ritually significant places in temples. Especially also at entrances. This realisation was a result of his general interest in other ancient cultures from around the world. An avid reader, and later also researcher, he realised there were so many interfaces between his temple’s traditions and others from around the world. This set him on his path to find out more. And to understand.

Although he discovered sphinxes are found all over India and through all periods, the living tradition is today concentrated in the south, mostly in Tamil Nadu. The Sanskrit name is purushamriga, or human beast, and this name is first mentioned in the Yajur Veda. In Tamil this become purusha miruga.

Raja’s research so far found that what are probably the oldest specimen were sphinxes sitting, like cats. Next we find walking and jumping. The art-historical evolutions shows a gradual development where the human form or aspect slowly becomes more dominant from approximately (as far as could be established) the 11th century onward. Finally in the Nayaka period we find fully upright sphinxes, with the lower body of a lion and the upper body of a human.

Raja concluded originally this was an indigenous natural artistic evolution which started from the Later Chola period (+/-1100 CE). Then in 2009 he received from another observant person, Darya Vorobyeva, photos of the two sphinxes that are guarding the entrance of the Kailasha temple in Ellora. He had hoped to go there himself, but this plan never came to fruition. Raja died in 2010.

And now Shashi Kolar send me photos of a sphinx-purushamriga depicted on a pillar in the Mallikarjuna temple in Pattadakal, build between 733-45 A.D. 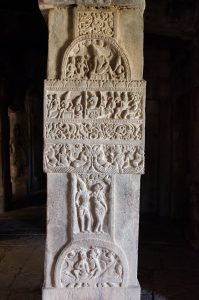 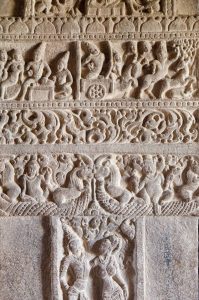 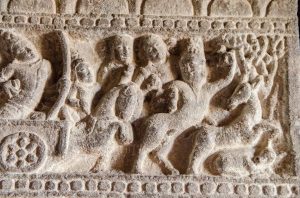 The Kailasha temple is thought to have been carved in the middle of the 8th century, and so is Mallikarjuna temple in Pattadakal. The sphinxes in both these temples are of the half upright type. 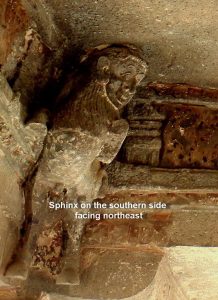 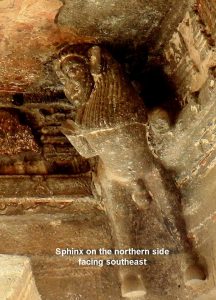 The one in the Mallikarjuna temple is actually of the half lion, half rishi type. Typical of the later phases, which seemed to be connected to the Nayaka dynasty. The relief seems to tell a story, but the presence of the warrior in a chariot is a detail that doesn’t reflect any of the by Raja Deekshithar far discovered puranas involving the sphinx in India.

The two sphinxes in the portal at the Kailasha temple are much more lion-like and archaic, and don’t have the rishi beard or jatamakuta we see in the Mallikarjuna temple. Their position reflects the two sphinxes of the Nataraja temple in Chidambaram, guarding the entrance.

This discovery of this sphinx depiction in this ancient temple in Karnataka generates many new questions. About the chronology,  art-history, mythology, and traditions involving the Sphinx in India.