This eclipse pavilion is located by the side of the Varasiddhi Vinayaka temple on the Western side of the East Coast Road just South of Mahabalipuram. It is the typical setup found with the eclipse pavilions: a four by six pillars structure with a flat roof. With at its back a mud pool that would have been a proper tirtha once upon a time. Just next to a Ganesha temple. It faces South-South/West. It has four pillars for width and six for depth. From the second row of pillars, it has a raised floor of granite flagstones. The frontal pillars reflect the pillar design from the Nayaka period and are decorated with deities and donors. With a square base and rearing serpent heads on the corners. Some pillars are well executed and decorated and have Nayaka style podikai (corbels) that represent hanging banana flowers. Some of the pillars have been left rough and uncarved.

Porch with donors and deities

The pillars of the porch of this eclipse pavilion are more elaborately carved than the pillars further inside. On the base of the pillars, we find the depictions of donors. One figure in 17th-century Western dress, and five Indian persons, holding hands in the gesture of anjali, expressing worship. Male and female as couples together on two pillars and one single male in Indian dress facing West towards the pond, and out towards the front.

I have tentatively identified the person in Western dress as the Dutch and (half) Japanese VOC official Willem Carel Hartsinck. On the opposite corner, facing inwards,  one other person depicted in Western dress is possibly Carel Hartsinck, the father of Willem Carel. It is remarkable that human beings, probably the ones responsible for the construction of this eclipse pavilion, are positioned in what at first impression is the most prominent position. Deities face East and inwards on these pillars. There are Shiva, Kartikeya, Devi, Hanuman, Garuda.

Interior of the mandapa

A detailed study of the sculptural program would be worthwhile. 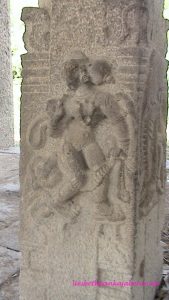 At the time of the Samudra Manthana, the Churning of the Cosmic Ocean for the obtaining of the Amrita, the Drink of Immortality, Vishnu took the form of a beautiful woman in order to confuse and seduce the Asuras. The Devas and Asuras have agreed to share the Amrita, the Drink of Immortality, equally between them. But the Devas conspire to keep it for themselves. Vishnu as Mohini diverts the Asuras as the Devas drink the Amrita.

Some of the reliefs decorating the pillars

At the center of the ceiling of the porch area there is a carving of one of the most impressive eclipse-related reliefs so far found with eclipse pavilions. The Sphinx of India also called Purushamriga in Sanskrit, and the Nayanmar saint Kannappa flank a beautiful lotus medallion, representing the spiritual power and energy of a solar eclipse.

Lunar and Solar eclipses on the ceiling

On the right side a vision of a Lunar eclipse, a pair of fish ‘face to face’, a solar eclipse, and a mysterious striped animal (tiger?) chasing a terrified deer or gazelle. At the bottom of the image,  a serpent or naga approaching the lunar sickle in the round disc from left to right clearly refers to a lunar eclipse. Two fish are carved facing ‘head-to-head’ right above the lunar eclipse. And above the fish, a naga or cobra is approaching or chasing a plain disc from right to left, which refers according to traditional lore to a solar eclipse.

What is the relationship between these carvings and what is their meaning?

‘Groundplan’ and lay-out of the ceiling

The pavilion from the front

The corbels or podikai are typical for the Nayaka period of South Indian history and architecture. They figure the shape of the hanging banana flower, a symbol of auspiciousness. In between the hanging banana-flower motive of the corbels, we find reliefs of the head of the Asura Rahu on the front of the eclipse pavilion, as well as on the side of the mandapa. Rahu is depicted as just a human head, with fangs protruding from his mouth. His hands opening and pointing down, making tarpanamudra or argyamudra, the gesture of libation.